Today, 22 September 2012, marks the third annual World Rhino Day. Individuals and organisations across the globe, including the WWF, will join with citizens in rhinoceros range countries in standing up against the atrocity of rhino poaching. 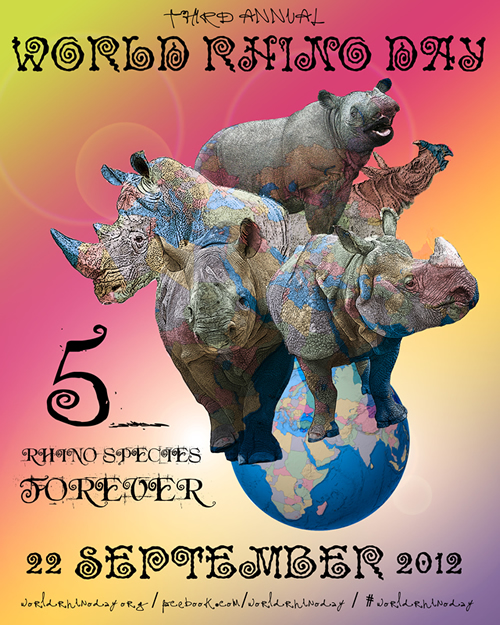 An extensive range of activities are planned to celebrate the event, including skydives, cycling competitions, fun walks and runs, music concerts and even sandcastle building contests, all to raise funds and awareness for the plight of these majestic animals.

Rhino poaching has reached shocking levels. In South Africa, one of the worst hit countries in the world, almost 1400 rhinos have been lost since 2008, and despite attempts at curbing the problem, the numbers are increasing daily. According to the latest statistics 388 rhinos have already been killed in 2012 alone. Policing the crime is extremely difficult, as it involves patrolling vast areas of land, and dealing with criminals that are ruthless, mobile and flexible, and that can strike at any time. To stand any chance of addressing the problem, focus needs to fall on infiltrating and cracking poaching syndicates, and building up reliable informant networks. Unfortunately the challenge doesn’t stop there – there have been numerous reports of game wardens and law enforcers being part of the poaching syndicates, thus counter-acting and nullifying the efforts spent on intelligence building.

Continued poaching is a symptom of larger societal problems such as unemployment and poverty, and a long as these remain, and there remains a lucrative market for rhino horns, stopping the poaching is nigh impossible. Sadly there is a growing demand for rhino horn in Asia, where it is used as traditional medicine.  As Dr Morne du Plessis, CEO of WWF South Africa, has pointed out, “Asian and African governments must work together to disrupt trade chains and to bring wildlife criminals to justice. Demand for rhino horn and elephant ivory is threatening to destroy a large part of Africa’s natural heritage. We want to see illegal markets for these products in Asia shut down for good.”

According to Dr. Joseph Okori, WWF’s African Rhino Programme Manager, “Rangers are putting their lives on the line to protect these animals from poachers and traders who are motivated only by greed. We salute all those working tirelessly to secure a future for rhinos, and we call on government leaders in Vietnam and China to do their part.”

Rhino poaching is one of the truly horrific crimes against nature committed by man, and it is shocking that it is continuing at such levels in this day and age. One can only hope that somehow, somewhere authorities will be able to find a solution if there is to be any hope of these proud animals being saved for future generations.